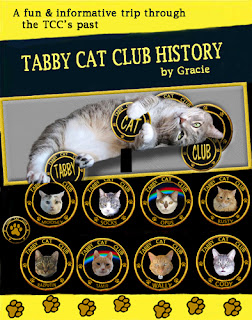 *Note: New history information will be posted when more research is done.

PART I
THE BEGINNING
November 2011 ~ December 2011
1. November 2011 ~ One day when I was noticing that there were clubs for special breeds of kitties I was wanting to join up with the tabby gang. I keep searching and found that I could not find that there was a tabby cat club. Hummmm, I say. Then I sent some emails out thinking I would get pointed in the right direction. Well the emails that came back everyone that I had written to said that there was no club for the tabbie kitties to join. I just didn't think this was right, I thought we needed a special place where the tabbie kitties could come together to post, play, and have fun. That was when I decided to start the club. So I got the blog going and now needed some technical support. I knew right away who I wanted to help me so I contacted Percy and Rusty, JFF (Micah would come on board to help later). Percy, Rusty, and Micah keep the blog looking fantastic with the special backgrounds, working on headers, and they set up the whole blog. They also help my mom out whenever she gets into trouble with things, which doesn't take much to mess her up. 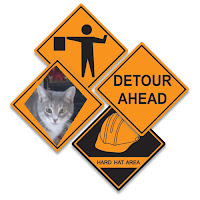 2. 15 November 2011 ~ "This blog is being started so tabby cats have a special place to gather and post. There will be tabby cat badges for all of our members. . . Looking forward to seeing and hearing from our dear Tabbies!" First post. Posted by Gracie 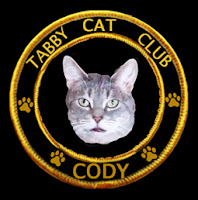 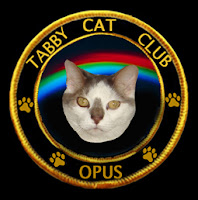 7. 2 DECEMBER 2011 ~ Opus, my nephew, today went to the bridge. He is the first of our members to go to the bridge since the club was founded. It is with a heavy heart we say until we meet again. Be free dear one. 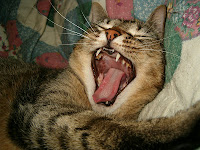 Tabitha shows us the art of the yawn.

3. 20 February 2012 ~ Carmine was first to celebrate a belated birthday at the club: "Carmie's birthday was on Saturday!! We have a collage of pictures over at our blog of him if anyone is interested in seeing some of his memories." 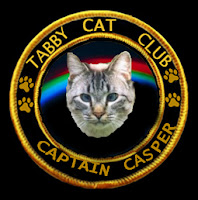 8. 21 May 2012 ~ Captain Casper our dear friend had gone to the bridge. He will be missed by all of his tabby friends. Run free sweet one. 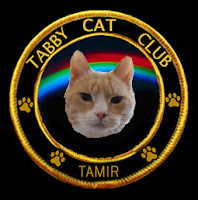 10. 20 September 2012 ~  Tamir has run off to the bridge today. My heart is heavy with sadness that my mancat had to leave too soon. I will forever keep him in my heart, we were just getting to know each other when he had to leave. I am glad that we had the time though it was short to spend together. Until we meet again my love. 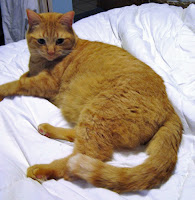 Dexter's Cute Tocks
11. 4 OTOBER 2012 ~ 400th post ~ Posted by Dexter. "I forget sometimes that I have never seen an October on the blogoshphere before . . . I was sooooo confused! But my friends here at TCC straightened me out so here they are the best pictures I would let the momma get." 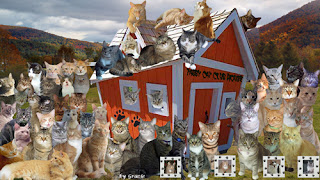 Fall 2012 ~ Group Photo ~ The first group photo taken of all members that joined the Tabby Cat Club in 2011. Graphic by Gracie 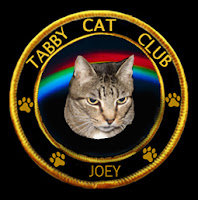 12. 7 December 2012 ~ Joey is our third tabby to run off to the bridge this year. Our hearts are sad as our dear friends have left us. We know one day we will see Joey and our other friends. Be free and run free. 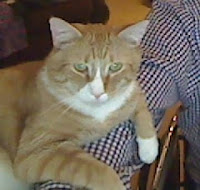 . 22 April 2013 ~ What's In a Name hosted by Oui Oui & Abbi Leala. So many names and the stories on how they were named. With twenty-two names they were all different except we have two Lucy names: Abbi Leala, Socks, Oui Oui, Derry, Nicki, Moosey, Lucy, Grace, Lucy, Gracie, Dexter, Woody, Audrey, Simba, Wendell, Clementine, Bambino, Rocio, Oja, Spyro, & Timmy Tomcat.﻿ 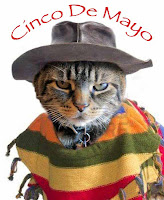 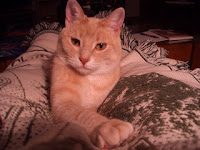 . 18 June 2013 ~ Chapter III names by Grace, "Milestones". Grace thought Milestones was a good choice because we reached some interesting milestones so far this year . . .  number of posts, number of members . . .
. 18 July 2013 ~ Our membership is now at 80 with Zoe from the Frum family joining up along with her siblings. 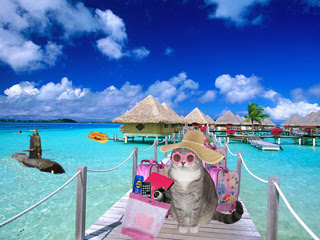 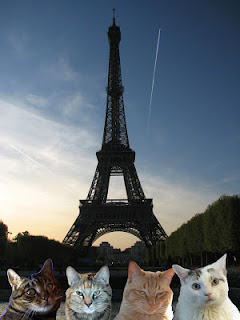 l-r: Oui Oui, Willow, Dexter, & Moosey
. 27-30 August 2013 ~ The Third Annual Blogosphere Trip to Paris. This fun event is an annual trip planned by Gracie. Everyone in the blogosphere is invited to join in on the traveling and post about their trip. Many packed their bags and nine tabbies shared their photos here at the club: Raz, Gracie, Timmy Tomcat, Silver Meow, Moosey, Oui Oui, Dexter, Willow, & Socks. 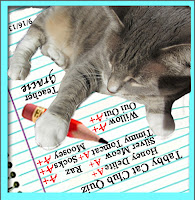 30 September 2013 ~ Tabby Cat Club 100 Membership Party hosted by Gracie & Raz. Today our club hit a milestone when we introduced two new members, Sonoro & Chili, making our membership hit the 100 mark. We are officially the largest and active club in the blogosphere. All the tabby kitties that have joined the club and the friends who visit us make this the bestest of the best club to be in. A big THANK YOU TO my staff, Raz: Executive Director & Events Planner, Socks: Technical Support, Williow, Dexter, Clementine, & Crepes: Recruiters, and our many members for all your help at the club. No onto the next 100 and grow to 200+!

30 October 2013 ~ Halloween Party hosted by our event coordinator, Raz. You didn't need to be a tabby cat club member to join in on the fun. Many kitties joined in on the Halloween fun: Katie Katz, Sammy, Gracie, Socks, the cats from Fuzzy Tales, Basil, Cat in the Fridge, Swami Zoe, Cody, Timmy Tomcat, Moosey, Clementine, Samantha, Angel Maverick, and the whole gang from Colehauscats.

7 November 2013 ~ Downton Tabby hosted by Gracie. It was high tea at Downton Tabby and eight of our best dressed tabby kitties attended this lovely event, even my dear friend Liz (aka Queen Elizabeth) was there: Raz, Socks, Sammy, Silver Meow, Dinnermintz, Pickles, and Charlie Rascal. 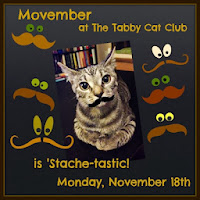 
1 July 2019 ~ TCC Monthly Newsletter, the first newsletter ever for the TCC was published by our official Repurrter, Teddy. He and his mom came up with this super idea for letting all the members know what is happening at the club. A big THANK YOU for Teddy and his mom!

Doing our history is a great idea Gracie. But then you are full of great ideas like starting the TCC.

This is a wonderfur idea! Cannot wait for more!

Purrs Gracie you are the Best!

Gracie, I can't believe all the naps in lovely sunpuddles you must have given up to do all this work! You are one amazing kitty!

You've done a wonderful job Gracie and I am so proud to be a Tabby Cat Club Member. Thank you and your assistant for all your hard work.
Luv Lucy

Wow Miss Gracie how do remember all this hiss-story???

Thanks for me being in a picture, but I'm not wearing any socks... wink,wink!
Dex

Thanks everyone for your kind words. The mom is going back through the blog to get the information. You all know here we don't have the memory for all of the information. Hey Dex, I just caught the typo when I was adding to the book. Correction made.

Thanks Gracie for doing the History of our Club!! I got to get mom to do more posts for me!
Howdy from your TX furiend,
Clementine