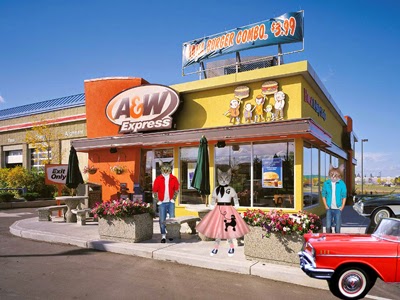 Graphic by Gracie
Raz, Gracie, & Sammy meet at the A & W before the dance.  Everyone needs to get energized with a burger and shake before shakin' it on the dance floor! 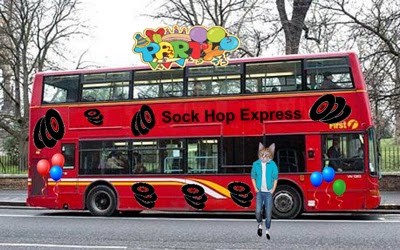 
Some will arrive at the school gymnasium in their own cars but others will take the special Sock Hop Express to the Hop.  Sammy's waiting - Hop on! 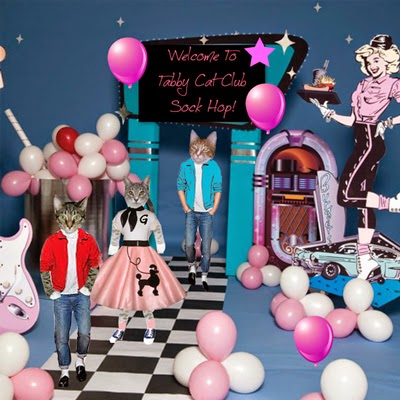 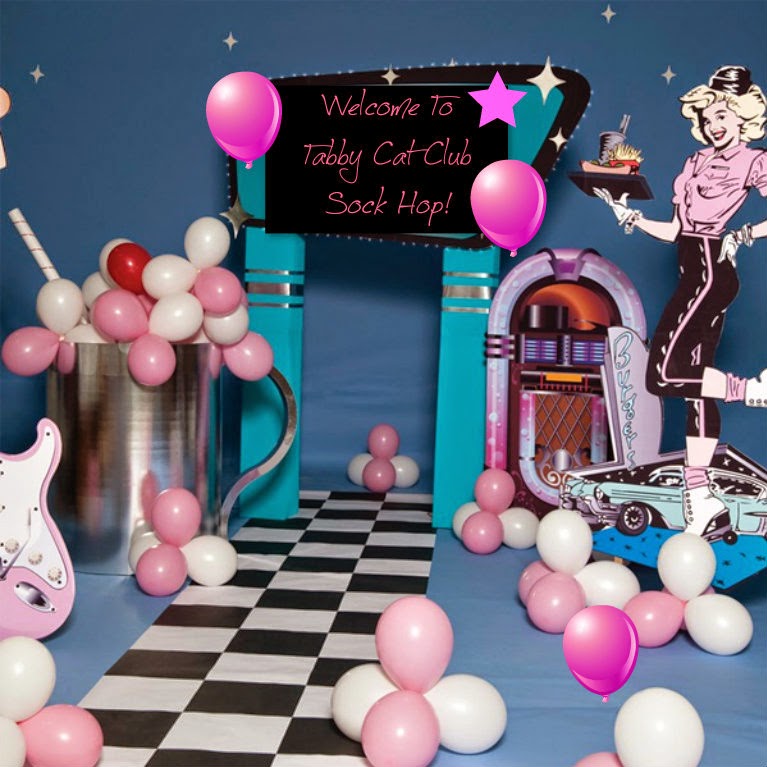 Take a photo of yourself as you enter the school gym! 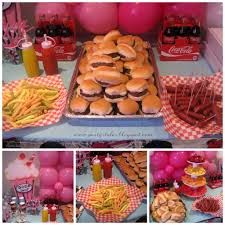 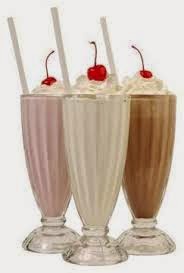 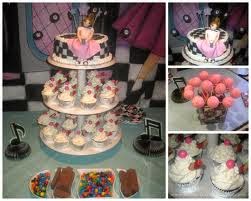 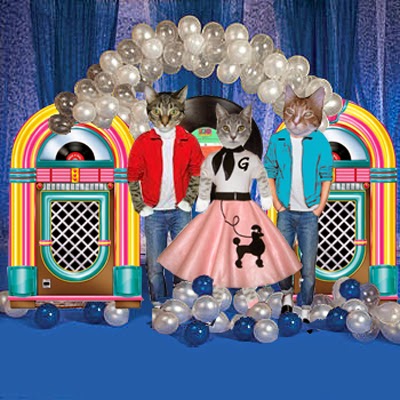 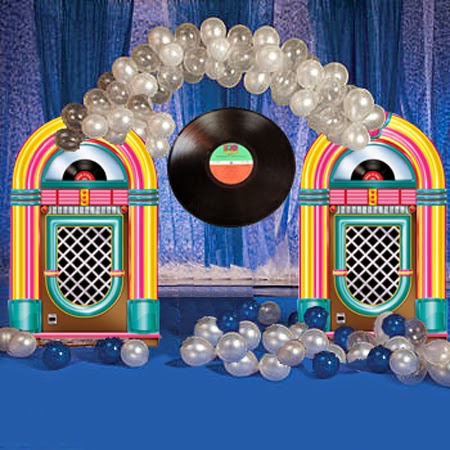 Have your picture taken here. 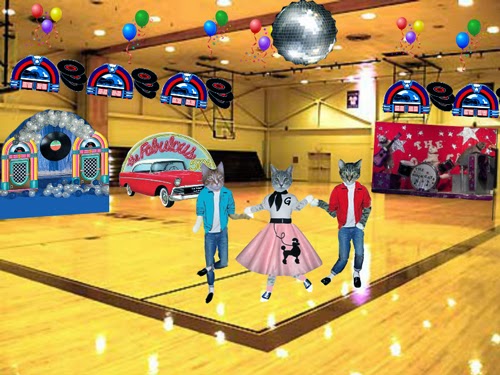 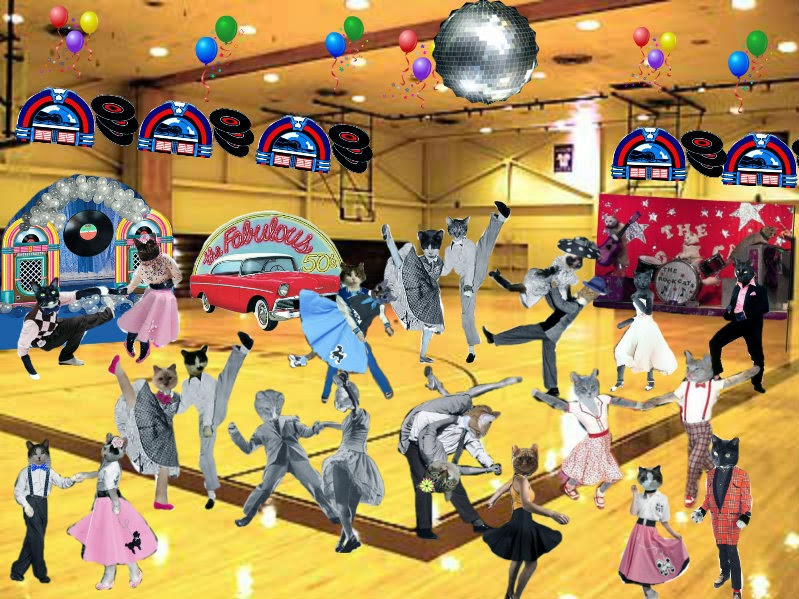 Graphic by Sammy
Wow - the joint is jumpin' and everyone is rocking to the tunes and having a ball.  Sooner or later though, everyone is ready to call it a night - or at least head over to the "local hot spot" the Malt Shop to talk about how much fun the Sock Hop was (and get something to eat).

Why not have a shake, malted, root beer float or even a burger or pizza?   It's a night that we want to go on and on and on. 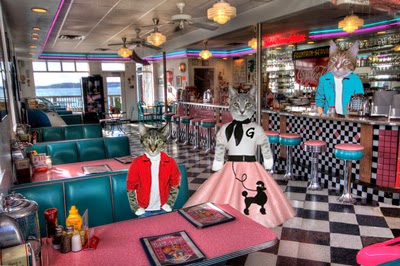 Graphic by Gracie
Raz tells waitress Gracie his order while Sammy waits to cook it.  Check out the menu to see what you'd like to have! 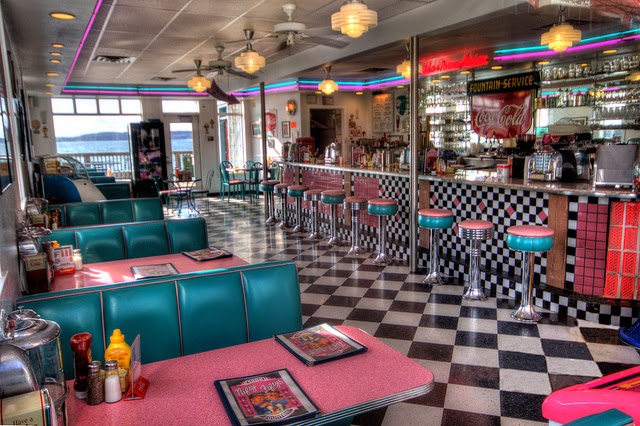 Join us after the dance at the Malt Shop before you head home (you can use this photo to put yourself into the action)
All good things must come to an end though.  Sooner or later everyone has to head home - what a GREAT night it was.  We hope you had a BLAST!   We sure did.....
Your Host Sammy, and his "Besties", Gracie and Raz
Posted by Angel Gracie=^o.o^= at 11:26 AM

Sure looks like this is going to be lots of FUN :)

wow! we can't wait to tellyport ofur!! this is gonna be a blast!!! now, to get dammit into that poodle skirt ...

I am going to be rocking around the clock all day and into the night!

So much fun! Hi Sammy, Gracie, and Raz.
Tubby

The band is soooo great and those milkshakes are yummy!!

This is beautiful! How much work is there is THIS!!!!! Well done - I am sat here smiling from ear to ear, it's beautiful!

Hoo Cat what a time. The dance hall was shaking with all the wild cat dancing.
Thanks for a great time Sammy Raz and Gracie
Timmy
Miss Fitz

Woowee! What a rockin' time Sammy, Raz and Gracie! I even saw Ralphie get out there and cut a rug! Thanks so much for hosting!
Marty

We are ready to rock around the clock and shake our tail-fevvers!

That sure did look like it was a hopping Hop, Sammy!