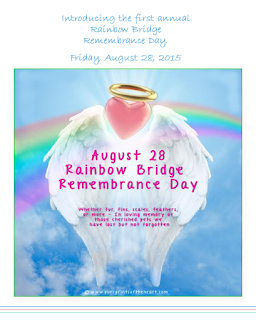 Thank you Miss Ann from Zoolatry for this beautiful event badge!

My Mom has had many fur children in her life but not a lot of photos of them as cameras weren't always handy and people weren't as "in to" taking pictures of their pets as they are these days.

But before there was ME in her life, there was a cat named Eddy.   Eddy was a stray who lived in my Mom and Dad's old neighborhood and he'd been a "neighborhood cat" since his family just abandoned him when they moved away.   This happens WAY TOO often we know, and it happened to him.  But he was fed by a lot of people in the neighborhood - including my Mom.   He had a decent life but no home.   He'd stop by for a visit frequently and loved to be petted.   Soon he was at Mom and Dad's house almost ALL THE TIME and would come inside to sleep.   That's when Mom knew that Eddy (which was what she'd always called him) was HERS.

Eddy was about 8 years old when Mom first took him to the vet to get a checkup.  So he was already older when Mom adopted him.    My Mom and Dad built a home out in the country and Eddy would go with them every weekend to check on the progress of the builders......and soon they all moved into the house where I live now.   Eddy had four more years of home sweet home before he became very sick and left for the Bridge.............but I really do wish I'd known him.   Mom says he was a very sweet cat - like me - but Eddy was lucky enough to actually be a character in my Mom's mystery novel "The Mystery of David's Bridge" and unless Mom writes a sequel and puts ME in it, I'll never be the STAR that Eddy was............... 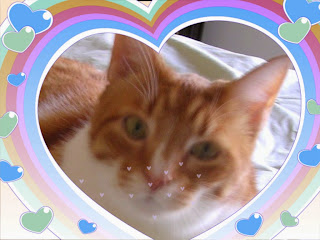 Today we all will remember the furry critters from our lives who we have loved and lived with until their names were called out at the Bridge gate..........we know it's a beautiful place but our hearts ache for just one last pet......one day we'll get the chance for that and more.

Thanks to Zee and Zoey for starting this remembrance day and for having a Facebook page for memories as well:

Please don't leave before you take your pawticipation badge for posting here at the TCC today! 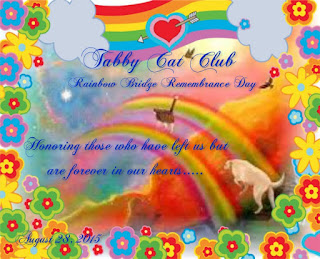 Love to all,
Sammy
http://onespoiledcat.wordpress.com

Our hearts never stop loving those that have left us. Eddy is running and playing with friends and forever young at heart. Some day we will meet Eddy and run with him.

Yes and that keeps me warm at night....knowing that very thing!

Happy Remembrance Day - for it's happiness that we feel for having the chance to spend time with special animals in our lives!

Eddy was a great cat! Thanks for sharing him with us!
Kisses
Nellie

We love that Eddy lives on in your Mom's book. Thank you for the great badge Sammy.
Luvs
Marty and Ralphie

Eddy sounds like a special cat! Thanks for sharing him with us.

Eddy was special and you are too Sammy.

Thanks Sammy. We missed posting here but visited all from the blog hop. Dad needs more time and we need friends like you!
Thanks so much for sharing about Eddy. We love that he is in the book and we have read about him
Love from all of us
Timmy, Miss Fitz and Family