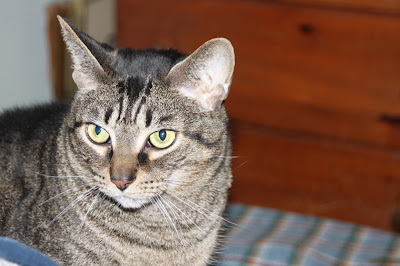 My mom Lily was feral and my bean Mom was trying hard to catch her but Lily had us kits before she could.  There was four of us - three white kittens and me a tabby.  Mom bean could not tell the white cats apart so she was seriously considering calling them all George - after George Foreman  who called his sons all George.  But what could they call me then? 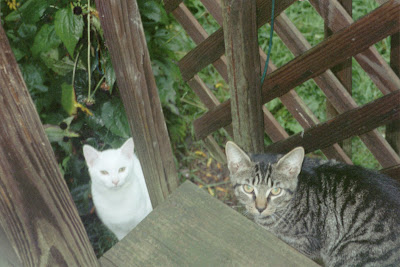 So, long story short, Mom called us three guys Norm, Sam and Woody after...wait for it...Cheers, the TV show.  In case you are too young to remember this - Norm is the mail carrier, Sam is the owner played by Ted Danson and Woody is the not so bright (thanks Mom)  bartender played by Woody Harrelson.  Since the fourth white kitten was a girl, Mom went with the George idea anyway for her and called her Georgie.  Don't know hwy she didn't go with Carla or Diane from the show??? Who knows?

So that is my naming story from Cats of Wildcat Woods and I am sticking to it!
Posted by wildcatwoods at 10:04 AM

Email ThisBlogThis!Share to TwitterShare to FacebookShare to Pinterest
Labels: Cats of Wildcat Woods, what's in a name, Woody

Thanks for participating in this fun event!!

I absolutely LOVE that you were named after the Cheers crew!!! LOVE IT!

Oh, our human remembers that show too. LOL.

We bet you're a lot smarter than the Woody of the program too!

How special were you to be the only tabby and your siblings were white. I liked how the mom names you and the mom here is old enough to remember that show.

I bet that everyone knows your name! And they're always glad you came!

Mom is being a jerk and making me say that Norm wasn't the mailman. Cliff was the mailman. Norm was the accountant, so you might want to buy Norm a calculamator.

Well, my dad remembers that show, so I guess he is officially old. Bwahahaha!

I love how you gotted your names!

Our mom is old enough, but she was too busy partying to watch much TV. But we think that is a great story, and we hope your mom can tell the difference between you now. George is better than Prince Michael. (Didn't MJ name his kids alike too?) Thanks for pawticipating!

Well Woody I like that story a bunch. Especially about how your Mom was feral and now you all have homes!

Great story about how you all got your names !
My mom-person do remember the TV-show Cheers , so now you know she is pretty old *mol*

Well we thinks Woody has a nice masculine tone to it and you remind us of Woody Allen.