Our Gotcha Day Stories by Spyro and the Gang 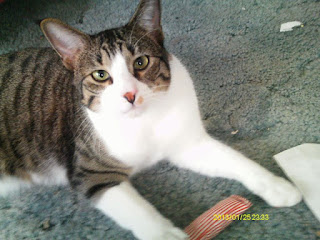 Spyro:  We aren't all members of the club yet, but we are all tabbies and Mom will join us all up eventually.  All of our Gotcha Day stories really begin with Herman because without him, none of us would be here, so I'll start with him.  Mom was sad and lonely and wanted a cat, but wasn't sure she was ready for one yet.  Then she saw a picture of Herman on a bulletin board with a notice saying that he was a sad and lonely kitty who nobody wanted to adopt because he was FIV+ and FeLV+.  Mom researched his diseases and decided that she could handle his care and adopted him. If Herman had let Mom know that he wanted to stay an only cat, Emma, Oja and I would never have been adopted.  However, Herman let Mom know that he wanted kitty company, so when the phone call came about Emma, she acted immediately and brought her home.  When the phone call came about me, Mom acted immediately again.  My family had decided that they didn't want me any more and took me to the County Shelter, who notified Friends of the Shelter, who notified Mom that I was at the shelter and needed a home as soon as possible or they were going to send me to the Rainbow Bridge for being FeLV+.  The nice man at the shelter offered to show Mom the papers my before family filled out to give me up, but Mom didn't want to know why they didn't want me any more.  She didn't care.  Whatever it was, she could handle it.

Mom put me in the safe room, but I didn't want to stay.  The very first picture Mom took of me was my asking to be let out of the safe room to meet Herman.  We were buddies at first sight.  I have been the greeter cat ever since.  I am always the first kitty to make friends with the newcomers. 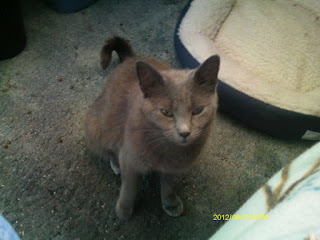 Oja:  This is the first picture Mom took of me.  I am in the safe room, getting ready to jump up in her lap.  Nobody knows where I came from.  The city shelter in Espanola has an drop box for people too embarrassed to admit that they are getting rid of their kitty.  I was dumped in the box one night and the shelter people tested me and spayed me and gave me my shots, then called Friends of the Shelter in Los Alamos, where Mom lives and told them about me.  The person they talked to was Herman's foster Mom and she called our Mom who came and got me that same day.  Wherever I had been it was BAD.  I was terrified and clung to Mom for dear life whenever she came into the safe room for days.  I stayed in the safe room for a month, though Herman came in to visit me daily.  I hissed at him every time and Mom put him out again.  When I finally came out to stay, I still hissed at Herman and Spyro whenever I saw them.  Very gradually I became good friends with both of them, especially Herman.  We would cuddle together and groom each other for hours.  I even started kitty wrestling with Spyro, though not with Herman.  He was just to  big for me to want to wrestle him. 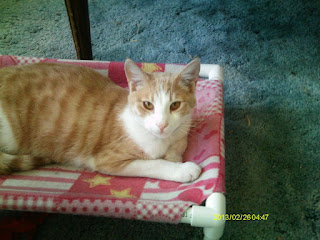 Rocio:  The first picture Mom took of me isn't very good and you can't see my face, so this is a later one.  In January Mom got a call from Felines & Friends New Mexico saying that Austin's and my foster parent was going to college and couldn't foster us any more.  We needed a foster home and fast.  Mom thought about it for a couple of days, then agreed.  The only reason she hesitated was because Oja doesn't like boycats and she thought twice about inflicting two more of us on her.  We moved into the safe room, but wanted out immediately.  We had seen that there was a lot more house and other kitties to meet, so Mom let us out.  We befriended Spyro immediately, but Oja hissed and hissed at us.  By February, Mom decided  to adopt up permanently because we were so bonded to each other and she couldn't bear the thought of us being adopted separately.  Spyro was also so fond of us that to let someone else adopt us would break his heart again, because he was already heart-broken over Herman's going to the Bridge.  Mom couldn't stand that idea either.  Our adoption was made official in March.  Unfortunately, Austin ran off to the Bridge in April and broke my heart anyway.  I was really glad that I had Spyro when that happened. 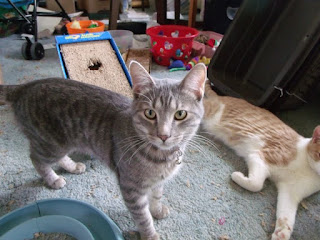 Bambino:  This is a much better picture of me than the first one Mom took.  When Mom emailed Felines & Friends to tell them about Austin, they told her in their reply that I had been waiting for a home for months.  Actually I was the original choice to pair with Rocio, but Austin came along just then and they were only four days apart in age, while I am a month younger.  My Mom said that she would love to have me come and live with her.  I was found as a tiny kitten wandering down a busy street in Santa Fe by my foster Mom, who is a vet tech with other animals, including another cat.  She brought me home with her and cared for me until I was old enough to be fixed.  That's when she discovered that I was FeLV+ and I spent most of the next few months mostly in a play pen, so I wouldn't infect the other cat.  I was delighted to have a whole room to myself, but I wanted out the first day.  It was scarier out there than I expected.  There was a friendly cat, Spyro, but there were two other cats who hissed at me.  I stayed in the safe room for two whole days, then I wanted out to stay.  When Rocio saw how much fun Spyro and I were having together, he stopped hissing at me and joined in the fun.  Oja has mostly stopped hissing at me, but she isn't my friend, either. 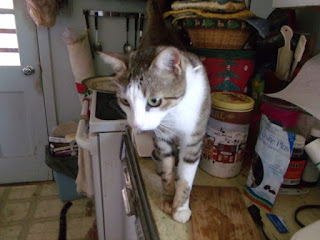 Jose:  I am camera shy and don't like to look at the camera, so this is the best picture Mom has of me so far.  A few weeks after Mom told Felines & Friends that she wanted to adopt Bambino, they emailed her about me.  I was in the Santa Fe City Shelter and was doomed unless I found a foster home immediately.  The only other possible foster home was an elderly lady in Albuquerque who already had a houseful.  Mom said the more the merrier and here I am.  I was found wandering around the streets of Santa Fe and picked up by Animal Control.  No one claimed me, so here I am as a foster.  Mom thinks she might officially adopt me, too, if Oja warms up to me and makes friends.  I spent an hour in the safe room, then wanted out to meet the other kitties I had seen upon arrival in my carrier.  I slunk around the living room the first night, just watching and staying under the furniture, out of the way.  The next day, I started playing THoE with the others, except for Oja.  Now I wrestle with Spyro a little, but mostly play chase.  Oja tolerates me near her now and can get really personal smelling me.  I gave her a little whap for that once, because she has a cold wet nose and I am sensitive back there.
Posted by Karen Jo at 7:04 PM

You are all so lucky to have adopted Karen Jo. She is one great mommit for sure. You are unofficially TCC members as with my computer on life support still I cannot do your badges. Will do them as soon as I can, don't forget to send photos with your names, birthday and gotcha day dates.

We love you all and are so happy that you have such a wonderful and loving forever home.

Thanks for participating in this event. We know Gracie will get you all "official"

We love that you all and Mom Karen Jo all gotcha'd each other! You have a wonderful and loving family, and that makes US happy. :)

Your mom is a lady with a big heart! How lucky for all of you she unconditionally opens her doors for kitties in need. Those are sweet stories indeed! Thanks for sharing.

Thank you for sharing your stories. Your family is very special. Purrs, Abbi Leala