Like Timmy, Grace's gotcha-day story is pretty much tied up in her "how I got my name" story, so we'll tell you about who else has the same gotcha day in the same forever home ... two of her four babies!! 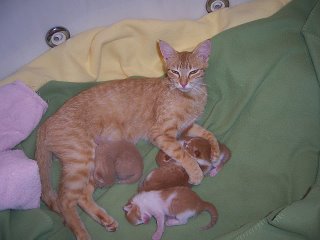 Grace had four tiny babies, and all five of them were rescued and housed by Deb and ML ~ and then Grace's blog was begun, to advertise that she and her babies needed forever homes.

Grace was immediately claimed by Marilynn in Texas ... but she couldn't get those other two kittens off her mind. So guess what? She took MommaGrace AND the two middle kittens, Pete and Foster. Gotcha Day itself was June 6, 2006 ... a wonderfully fun-filled day!! 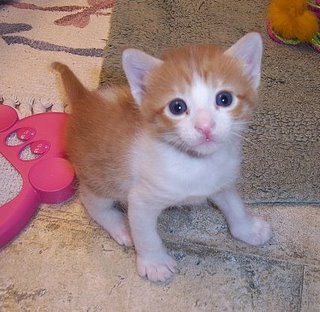 Baby Pete, at about 6 weeks; he was re-named Audace. 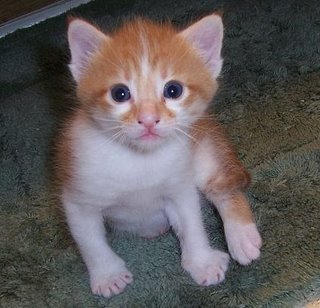 Baby Foster; he was re-named Ruse!

And here are some places to see them when they were just beginning to grow up and still hung out with their momma! 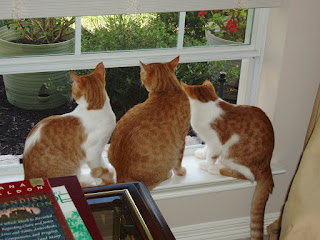 Happy Gotcha Day Grace - we are so delighted that Pete and Foster were gotcha's too a couple of weeks later.
Luv Hannah and Lucy xx xx

Happy Gotcha day to you all three !

That is a marvelous story. Wow what kyooties. Love Orange Tabbies. Wonder why MOL

So happy that you all three got to stay together and now have a furver home with wonderful folks!!!

Oh, I never get tired of hearing your awesome gotcha tale, Grace, Audace and Ruse (and Marigold and Brutus, too)! It makes me smile really big!

Such a wonderful story....thanks for sharing!

That's a great story guys. Thank you for sharing it. Purrs, Abbi Leala

Those little faces are so precious, and their kitty family so lovely, we can see why they had no problem finding homes. Thanks for telling us your story.

That's a great Gotcha Day story. I am glad that you all found great homes.