What's in a Name? Audrey and Simba

Audrey has a rather glamorous reason for her name.   When her first Mom (our now humans' daughter) got when she was about 8 months old, she was impressed with the pink-reddish color of her coat, though much paler than usual ginger cats.     The redhead she thought of was Audrey Hepburn.   So Audrey was named for her.

Simba was adopted from another family who had to give him up when he was about 1 1/2 years old.   The poor young Mommy was getting a divorce from her husband and moving in with relatives, who had a child who was allergic to cats.      Our humans still remember how she cried when she had to say goodbye to him, though she was very happy he found a new family.    She named him Simba as a kitten, after Simba of the Lion King (isn't that possibly where all Simbas get their name?).   So although his name is not very original, he is proud of his leonine heritage, and we feel his Manly Mane shows it was an appropriate name for him.

These are pictures from younger days: 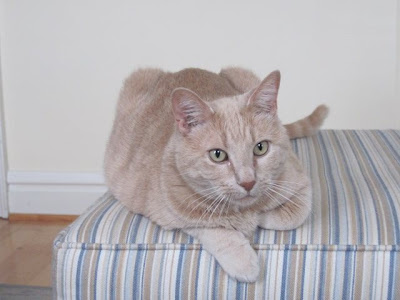 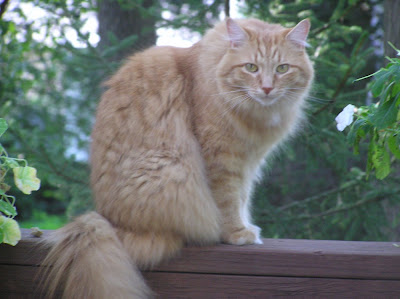 You two are such beautiful ginger tabbies. I loved how you got your names. I am sorry that Simba's original folks had to give him up but so happy he is with you in a wonderful forever home.

We, took are sorry Simba's original human had to give him up, but he ended up in a fantastic home, so it all worked out well!

Audrey's name is fitting, given she was named for such a classy actress. :-)

Audrey and Simba look as if they could be related. Our Mom loves the name Audrey and keeps saying she's going to use it for a kitty, but it seems none of us girls so far have fit the name. Purrs and hugs from the kitties at The Cat on My Head, Lily Olivia, Mauricio Misty May, Giulietta, Fiona, Astrid, Lisbeth and Calista Josette

We think how you both got your names is great. Simba, we think you might be right that most Simbas originate from the Lion King...but we think that's appropriate, don't you??

We're sorry that Simba's first Mom had to give him up, but we're glad he came to live with you. We think both of your names are purrfect!

Thanks for participating in this fun event.

Those names are PURRfect for you both! We love your namesake Audrey Hepburn, and Simba from the Lion King, well, he's a KING (and so are you! :)

We think Audrey and Simba are great names, very elegant. And Simba is one of the handsomest mancats we know. One of our lady cats swoons over his manly main. Thanks for posting!

Well I have a soft spot for Orinch Tabbies (Wonder Why Meow) and think these are purrfect names for two purrfect kitties!

Purrfect names for you two red heads :)
Sorry to hear that Simbas mom-person couldn´t keep him , but glad he got a purrfect home with you :)

wow Simba looks a lot like my cat Herr Gato, they could be twins :)

We thinks Audrey is gorgeous just like her namesake and Simba totally fits his name.