Fuzzy Tales: What's in a name?

It's been so long since we've participated, probably none of you remembers us. LOL. Blame our so-called servant for that!

Anyway, since this didn't require much creative or intellectual power, she thought she could muster a post for us. 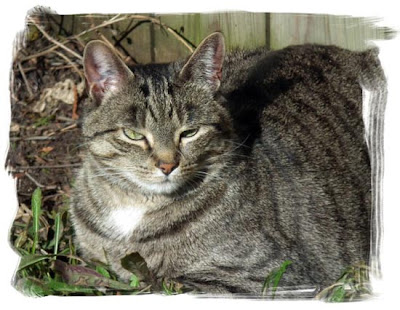 There wasn't any question as to my name. The human knew she would adopt a Nicki at some point, and when she saw me at the pet store adoption centre, she just looked at me and thought, "There's Nicki." I was sitting at the front of the large floor to ceiling cage, and wasn't feeling very well, had an eye infection. So I was quiet when she saw me. (Heh heh, that's how I suckered her!) My shelter names was Gee Whiz, and I all I can say to that is, Uh, gee....

So "Nicki" it was, right from the first! 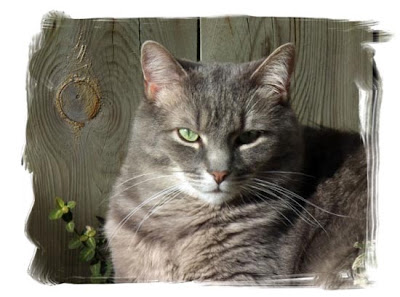 My shelter name was Rock and I had a sister named Roll, as well as a brother who's shelter name I no longer remember. When the human was adopting me, she had a bit of a struggle before my name revealed itself to her. "Derry" is an Irish name, of course, which is odd because she's actually not fond of things Irish. She figures it's related to a past life, her aversion. As for me, I'm not going to reveal how "Derry" occurred to her!

So that's it, nothing terribly interesting at all about how we got our names.  :-)
Posted by Fuzzy Tales at 2:00 AM

Email ThisBlogThis!Share to TwitterShare to FacebookShare to Pinterest
Labels: Fuzzy Tales, what's in a name

We loves all things Irish especially your name Derry and we rather like the name Nicki too.

We love your names ... and we're glad you decided to let us in on your story. Name stories are always fun, we think!

You have beautiful names.

Those are great names. Um....Gee Whiz? REALLY? What were they thinking?????


Thanks for participating in this fun event!

Thank goodness your Mom changed your name to Nicki - Gee Whizz whoever named you that wants shooting! Derry that name suits you so much more than Rock did.
Luv Hannah and Lucy xx xx

So glad to learn how you got your name. Now don't be so hard on the human. They just sometimes get busy. Love how they had your name waiting to find you.

I think your story is quite interesting! Gotta tell ya I love the name "Rock" for the other kitty lol.
Don't feel bad...we haven't purrticipated here in AGES and we are members!

Every story is interesting. We love your names. It's nice to see you two again. Purrs, Abbi

Well, I love the names "Nicki" and "Derry" better than "Gee Whiz" and "Rock."

And we could NEVER forget you two! :)

Moosey (and the dad)

We have to say, we are glad your mom changed your names! And we think the most interesting part of the story is the part Derry isn't telling! Did it have to do with derrieres? Thanks so much for pawticipating, it means a lot.

Well I think you are both very interesting kitties fur sure! I like Nikki and Derry too!

My mom-person have been in Dublin and she LOVES Ireland :)
Me nad mom have alway´s thought that your names suits you purrfectly !