If you (or your people) are fans of the TV show "The Big Bang Theory", then they undoubtedly have, on time an occasion, sung the healing song of the cat " Soft Kitty".   It works for a variety of purposes, but mostly to help bring comfort to an ailing human.  Here, take a look.

Lots of people think that some one knowledgable in the healing ways of cats, made up the song just for the show, but not true!   The song was originally called "Warm Kitty" and was written back in 1937 by a lady named Edith Newlin.  The show tweaked things a little bit, and it's now a favorite of soft hearted humans everywhere. 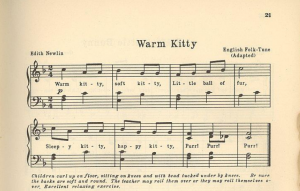 So knowing what great healers we kitties are (hey, you don't hear anybody out there singing "Soft Puppy" to a sick person, do ya?) we thought it would be great to show everyone what it looks like in action.  And since we know that the vibrational striping patterns found on cats of the Tabby purrsuasion to be ultra-healing, we are going to tweak the song one more time and have you show us pictures of your "Soft Tabby" song in action.

So share pictures with us of your softest, warmest, happiest and sleepiest best and spread the word of cat healing with the "Soft Tabby" song on Monday November 25th!

Thanks gang!     Dexter and Willow
Posted by Cherry City Kitties at 9:13 PM

our human loves the tbbt and the song. she sings that all the time and teaches it to all the little kids she meets.

Tabby kitties are so cute!

Thanks for the reminder! I need to get going on this event!!

We love it. I'll try to participate if my addle brained human doesn't forgets. ~Socks

My humans LOVE "The Big Bang Theory" , so YES they have heard this song moore than once :)

Woohoo! We're so excited for this event. See ya in a few hours! :)