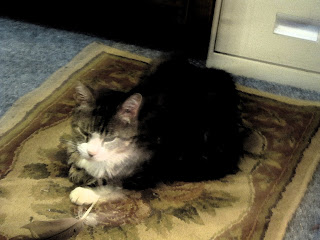 Well Mommy missed some purrfect photo ops but she was rather irritated so didn't think of it until after the fact. See I am suppose to eat only y/d food to control my hyperthyroidism. Well I don't much like it so I marched in the utility room straight passed Tuiren & Fenris (our doggies) and made this pawesome leap up on the washer and dryer and then leaped to the shelf above them to eat the DOG FOOD!!!!!!! she had put up because Tuiren and Fenris didn't eat it. I was gobbling it down like there was no tomorrow. But Mom says at least she knows I am feeling better because it has been a long time since I have made a jump like that.

~Socks, reporting for ATCAD
Posted by Alasandra, The Cats and Dogs at 1:00 AM

Hmmm... Was it good? MOL!
Glad you are doing better Socks!
Your Pal Timmy

That must have been a pawsome leap. We hope you find a food that is good for you and that you like.

There is only ONE y/d food, made by Hills. I don't like the dry at all, we thinks because it has pork in it. I will tolerate the canned but only mixed in with my regular food.

Dog food is very yummy, I don't know why the Mom gets so annoyed when I eat it. Tuiren and Fenris don't mind and I am happy to share my cat food with them.

It was a most spectacular leap.

Doggie food huh? Must have tasted pretty good for you to continue to eat it.

I like the dog food too! I eat the few pieces my brother and sistah leave by their bowls. Me-Ommmmm

That must be some yucky food if you will eat dog foods instead! I'm so glad you found a creative solution to the problem though. Thanks for posting!

I am glad that you are feeling better, Socks. Your appetite seems good for you to gobble down dog food. We are sorry that your y/d food is so yucky.

Spyro and the Gang

The cat who lived her before me hade hyperthyroidism too and he too gobbled on almost any kind of food accept his own :)

We can see how that would make the mom and dad crazy, but we are glad you're feeling better, Socks. :)

WOW!! That was one pawsome jump Socks!! I like Mavericks food and I eat it every time he comes to visit!!
Hugs & Kisses,
Samantha