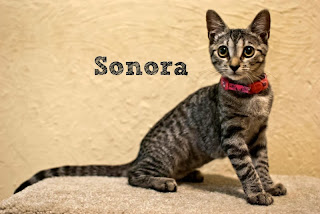 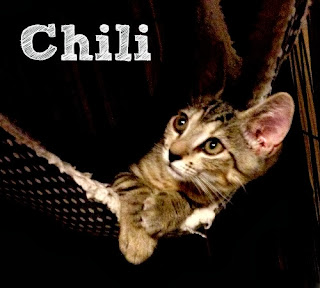 Hello! We're Sonora and Chili from Purrchance To Dream.  We're The Peppers!  We are #99 and #100 in the Tabby Cat Club First One Hundred, and we're very honored to hold those positions!
We would have posted sooner but our NTM (Not The Mama) from Purrchance To Dream and The Cat Blogosphere (he's the one who does the daily Linkies posts and Birthdays and Gotcha Days at the CB) has been busy the past two weeks interviewing.  See, he just got his Florida Department Of Education teaching certification, and he's now eligible to be a teacher.  He's certified to teach English for grades 6 to 12.  And we'd like to announce it here officially: he has a job offer!  He goes this week for new hire paperwork, fingerprinting, and the pee in the cup thingy, and once all that passes, he can start teaching!
It's a great high school in Orlando, Florida - one of the biggest, best high schools in the country!  There are over three thousand students there!  That's like more than all of our tabby stripes, combined!
So, here's the official announcement: he's going to be an English teacher for sophomores, juniors, and seniors at West Orange High School.  We're so proud of him! 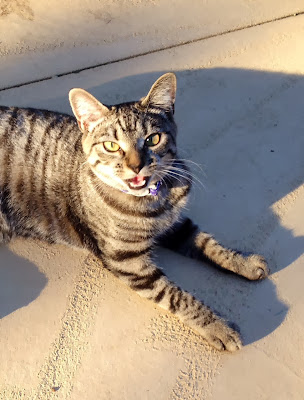 But hey, enough about him - this is about US being new members of the Tabby Cat Club.  For those of you who don't know our story, our NTM was our foster-parent who raised us from being abandoned bottle babies.  Sonora almost died when she was really tiny, and by the time NTM nursed her back to health, he knew he could never let her go.  It took Chili a bit longer to convince him that she was here to stay, but soon he officially adopted both of us and we are part of the Purrchance To Dream Forever Family.  We're so happy to not only have a home, but to be members of The Tabby Cat Club!
Meow for now,
Sonora and Chili 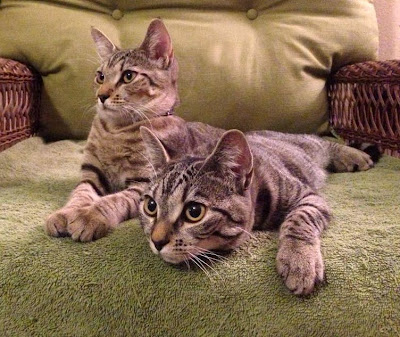 That is so terrific that NTM has a job and it sounds like a job that he will enjoy. Good work Mo. We are so happy for you.

Welcome to the Tabby Cat Club! ConCatulations to NTM! We know he's going to be a great teacher!! How cool that he made the announcement here at the TCC!

Congrats to your Pop for getting such a wonderful job teaching. Your students will have a super teacher!

Welcome to the club, and (just as important), concatulations to NTM on the new job. How exciting for all of you!

A BIG WELCOME to TCC and ConCATulations to NTM on the new job !!

HOORAY and congrats!!! What wonderful news!

Concatulations! We think that is a very lucky school to have you-

WOW! NTM has a great new job AND you're in the TCC ?!?! We don't know what's better! Heck, we're just happy about both!

Welcome to the TCC, Sonora and Chili Pepper! You will love it here, for sure. :)

And conCATS to NTM on the teaching degree and the new job. Woohoo!!!

Concatulations to all of you! We know NTM must be excited!

You two are gorgeous tabby cats! Welcome to the club :) And congratulations to your NTM on the job!

Nice to meet you, and congrats to your NTM on the new job!

Welcome to the TCC - looking forward to hearing more about you.

A winderfur story and WELCOME to the Tabby Cat Club!

Super good luck to NTM on getting work. That is so hard for so many. What a nice place he will be going and doing such good works. Purrs

We have little ones here on Foster. On almost passed over the bridge so...
We shall see

Welcome you two. So happy to have you as new members to the club and so looking forward to getting to know you better.

Concats to NTM! And to you two cute Peppers too! Welcome!